The last month has been filled with houseguests, activities, vacations, impromptu travel, and more houseguests!


It all started around the 23rd of June when we had friends from Portland drop in for a quick overnight on their way through to California. We had a great visit, drank some good homemade meads, enjoyed homemade salsas and just generally had a great evening. (This is a good time to let you all know that we have a lovely guest suite available for anyone else making a similar trip on I5 – we are just off the freeway and a good stopping point.)

The following week my mom and my brother came for a long weekend; we spent a lot of time visiting and enjoying the beautiful weather. We also ate some really delicious dinners! I made dinner one night, my mom picked a dinner and made that another night, my brother made a dinner (delicious crock-pot habanero chili!) and Chris wrapped up the visit with lovely brisket.

The Fourth of July was the beginning of Chris’ weeklong vacation, which I have posted about already, including all the fun adventures and travel we had that week! Yay for wine and hiking!


At the end of that week we had another Portland friend drop in for a quick overnight on his way through home from California. A very enjoyable evening spent on the patio with the gas fireplace and good company. We stayed up waaay too late, though!
The following weekend we had a completely unplanned and last minute invitation for Chris to play in a golf tournament in Kelso, Washington, so we made a trip up north. He went golfing and I had a great chance to visit with some of my Portland girlfriends. We had some sipping chocolate at Cacao in downtown Portland and later had breakfast at Biscuits in Lake Oswego. Later that evening, we went with our friends to another couples brand new home in Lafayette, Oregon. Their home is beautiful and we had a nice evening getting a chance to see a few more friends. Sunday we spent the day at my brother’s place and toured his garden, and were treated to some fresh greens. I posted a blog about how amazing his garden is doing already. He is already making pickles! We hung out for several hours, enjoyed coffee and camaraderie, had some lunch and then started the long drive home. 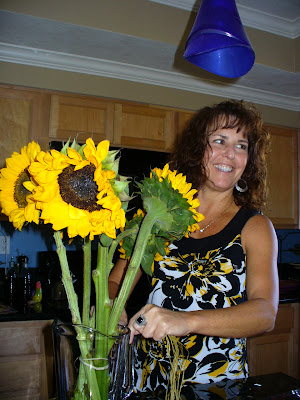 A quick week zipped by and we had our last scheduled houseguest. One of my good girlfriends from Portland, Heidi, came to visit for the weekend. We had lots of fun and crammed a lot of activities into the short weekend. Friday evening we hit up our local winery, Roxy Ann Winery, for some lovely Claret and the musical renderings of Smoky Red. It was a beautiful evening; I love live music. 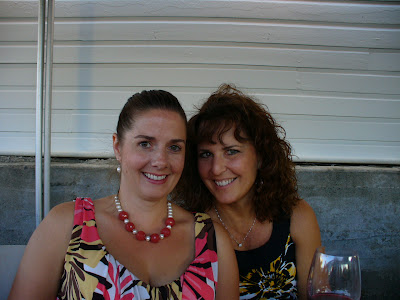 Saturday morning we went on a jet boat tour of the “wild and scenic Rogue River” with Hellgate tours. (www.hellgate.com) It was an absolutely wonderful experience. 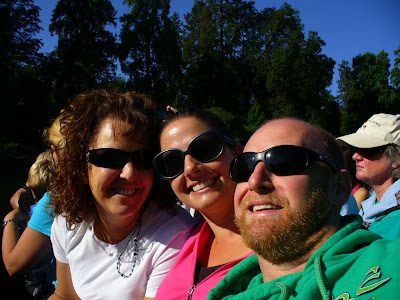 We went for the 2 hour excursion; while it was a bit chilly in the morning, the sun was shining and within about a half hour or so the weather was more comfortable. We saw a variety of wildlife including several osprey, bald eagles, a white egret, several blue heron, deer and fawns, and ducks! 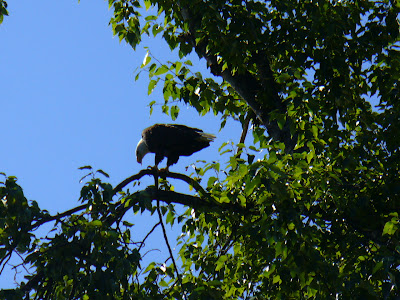 We also saw a beaver den. We travelled a bit of a way down into the Hellgate Canyon, which is a site of several movie scenes, including one with Katharine Hepburn and John Wayne in “Rooster Cogburn”.

Saturday evening we headed back to Roxy Ann to do a tasting since they were not tasting the evening before during the concert.

Sunday we opted to head out for a hike in Lithia Park in downtown Ashland. We hiked a mile or so up Ashland Creek to a small reservoir. The weather was gorgeous, hot and sunny. We stopped for lunch at the Black Sheep Pub. It is an Irish pub in downtown Ashland that Chris and I have wanted to try for quite some time. While the food was pretty darn good, the prices were high. Chris ordered a Twisted Thistle IPA (in a bottle) and it was $8.50. Yes, $8.50 for a single bottle of beer. It was also $8.50 for my lunch of banger and mash with peas. Heidi had a pear and spinach salad for $7.50. Chris had the full order of bangers and mash with peas for $13.50. Yikes! It was a pretty spendy lunch. We headed back toward Medford so Heidi and I could do a little shopping. We also spent parts of both Saturday and Sunday afternoon in the backyard enjoying the sun.

Sunday evening we had tickets to see the Oregon Shakespeare Festival performance of The Pirates of Penzance at the outdoor Elizabethan Theater. Chris and I have now seen three performances at the OSF, one in each of the theaters. The evening was quite hot (we had reached temperatures in the mid 90’s both days) and was not cooling off very quickly. The theater didn’t allow for much air circulation, so it was a bit stifling. The performance itself was quite enjoyable, except for the fact that I couldn’t understand a significant portion of what was being sung. The lead actress (Mabel) in particular sang with such an operatic voice that I was completely unable to understand anything she sang. The overall performance was fun, funny, updated with bits of music and dance to modernize the play, and the performers did a good job. This play, however, did not suck us in as the last two plays we have seen at the OSF. (We saw Ruined last spring and The Imaginary Invalid this spring-both excellent performances.)

Prior to our arrival at the theater we had stopped by Tabu restaurant (http://tabuashland.com/) in Ashland. Tabu calls itself a Nuevo Latino Cuisine. We went upstairs for a glass of wine and some small plates. We ordered the full nachos with chicken, the portabello mushrooms with pesto and the chipotle chicken wings. The nachos were quite tasty, but ask for extra salsa. The mushrooms were a total disappointment; the flavors of the mushrooms, cheese and pesto topping just didn’t jive. The chipotle chicken wings were okay, a little on the spicy side for me. Again, the prices were steep. We ordered the three appetizers and each had a beer or wine and our total, including the tip was over $70. Yes…over $70 and we didn’t even actually have dinner. That is Ashland for you, though.

We did drop in to a couple of other places before we decided on Tabu. One was Chateaulin (http://chateaulin.com/), a French Bistro and Wine shop. Let’s just say it is VERY French, pricey and not quite what we were looking for that evening. The second place was O’Bryan’s Irish Pub. This is a bar; it is dark, narrow and I’m not even sure if they had food. It didn’t smell all that great and the front half of the bar had poker machines and the back half had pool tables. It is a place for dudes to go drink beer, not a place for ladies to go have wine before seeing a play.

So, with that we wrapped up a very full month of guests, travel, adventure and culture. The next month should be much quieter; we don’t have anything officially “planned” until the end of the month. In the meantime we will likely be busy with the garden, picking lots of basil, zucchini, and the tomatoes should be turning red any day now…and whatever else pops up out there! That will mean lots of canning, drying and pickling!

For now, we are so glad to have seen so many friends and had such good times during the last few weeks. Thanks to everyone who made that possible!