Okay, so I'm a tish late on this one...but still! Happy November! 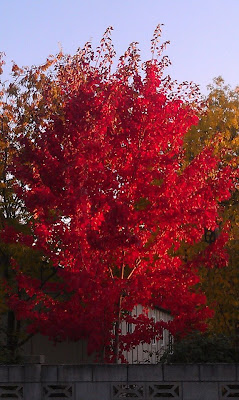 The last week was somewhat of a blur, hence the no posts since the 30th!

Here is a brief recap of my weekish:

Halloween I had school, totally forgot to wear my orange and black or my Halloween jewelry. Was bummed. Had a grand total of 7 trick or treaters (3 groups).

November 1st! I started my semi-annual 14 day cleanse. I was feeling like my eating had gotten much messier than I wanted it to be, especially with the wine tour and all the Halloween candy. Cold Turkey (haha) I stopped drinking coffee, alcohol, eating candy, sugar, bread, meats and pretty much anything that isn't a vegetable, whole grain or legume, or fish. If you are interested in the cleanse I do, you can check out posts about them HERE,  HERE, or HERE. There are a few other posts right around those same times as well, so you can check those out.

I am on day 8 and doing great! My food has been very clean. I have exercised 3 times this week so far. I am drinking lots of tea and water. My clothes are fitting better and I have that "emptier" feeling in my belly. I, also, have been less hungry, which is NICE. One bad side effect, since I didn't do any pre-detoxing (like skipping coffee or wine or candy for three or four days before I started the cleanse, which I normally do) I have had some raging detox headaches. I have had to succumb to the advil a couple of times due to the pain. I am hoping the worst of that is over!

We are in week 7 of school. Crazy, I know. Gearing up for finals, term papers and then winter break in just a few short weeks!

This past weekend was all about hanging out at home and cooking! And football, of course. I watched the Packers/Chargers game and it was AWESOME! That game is why I watch football! Intense and spectacular.

I did a ton of food prep for the week throughout the weekend, including:

Red rice, amaranth grain, roast a whole chicken, bake pumpkin cranberry muffins, make lentil soup and Chris and I made these little apple "pies". OMG...they smell SO good. They aren't on my cleanse diet, so I don't get to try one until next week, but he claims they are delish!

Remember my canned apples? Well, Chris is a genius and decided that we should make little apple "empanadas". Basically we took some premade pie crust (cuz I'm lazy) and cut it out in about a 4 inch rounds. Then we took a spoonful of the apple mush and put it in the circle and folded the pastry over so we had a little half-round. We brushed a little butter on top and sprinkled some cinnamon and sugar on them. Baked them for about 14 minutes at 375. They SMELLED YUM. We put most of them in the freezer. We still have lots more mush, so we will likely be making more. I would show you one of the many pictures we took, except, well, the memory card wasn't actually in the camera when we took them. Oopsie!

I managed to read Destined, the latest in the House of Night series. I liked it! Of course, it isn't over yet!

Chris also started another batch of mead this weekend. He made a beer a couple weeks ago. I didn't take pictures of that either. I am a bad blogger.

So that is a brief recap of what I've been up to! 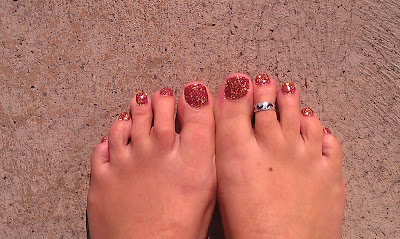 Plus I got my toes done in a cool orangey-red-gold sparkle for fall! It is awesome.

What did you do this weekend? Do you prep food for the week in advance?