A few weeks ago, I mentioned that I had made a new recipe for acorn squash.

Typically, when we have acorn squash, I poke a hole in it with a knife, stick it in the microwave for a few minutes, cut it in half, discard the seeds and bake it in the oven, skin side down, with just a bit of water in the pan, until it is soft. Then I flip it over, add some butter and brown sugar, and stick it back in the oven until the butter and brown sugar are all melty.

A number of years ago, I found a recipe for a cranberry and apple stuffed acorn squash. Chris was not enthused about trying it. He basically said that the only way to cook acorn squash was with butter and brown sugar. So, I never made it.

Then I came across this recipe: 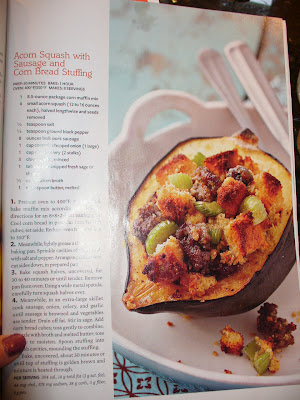 This is from the summer Special Interest issue of Better Homes and Gardens called garden fresh recipes.

Even Chris thought this looked delicious and that we should make it. And so we did!

It really was delicious. A great mix of flavors, with that fall comfort feeling included. The savory instead of sweet was a really nice change. We both ate it all up and are looking forward to making it again!

(I made the full recipe for the stuffing, but only had one acorn squash-so two halves. I stuffed them, and then I took the rest of the stuffing and put it in little ramekins and baked it until the top was just browning. They made GREAT leftovers for lunch and dinner the next night!!)

Meanwhile, lightly grease a 15x10x1-inch baking pan. Sprinkle cavities of the squash with salt and pepper. Arrange squash halves, cut side down, in prepared pan.

Meanwhile, in an extra-large skillet cook sausage, onion, celery and garlic until sausage is browned and vegetables are tender. Drain off fat. Stir in sage (or thyme). Add corn bread cubes; toss gently to combine. Drizzle with broth and melted butter; toss gently to moisten. Spoon stuffing into squash cavities, mounding the stuffing.

Bake, uncovered, about 30 minutes or until top of stuffing is golden brown and mixture is heated through. 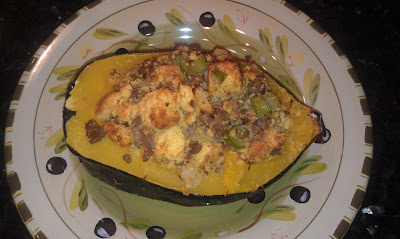 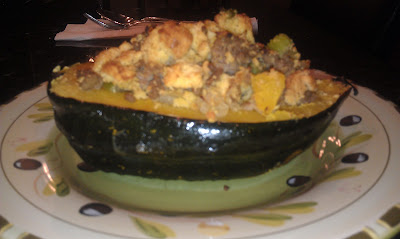 How do you eat your acorn squash? Are you a butter and brown sugar traditionalist, or are you an acorn expirementer? What's your favorite topping/stuffing? Let me know in the comments!
Posted by Corrie Beebe at 2:48 PM