This past weekend was one of those that was just a great weekend.
Saturday we took the boat out for most of the day to Lost Creek Reservoir off Hwy 62 here in Southern Oregon. It is our favorite local lake. Nice and big, with plenty of places to escape the wake board boats and relax. 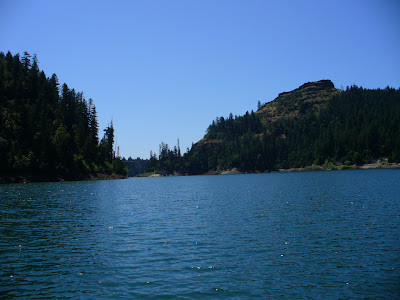 This trip we went farther to the east end of the lake, up into a no wake canyon. It was quite peaceful. There were a few other boats here and there, but we really had the place to ourselves. We listened to some good oldies music, and just relaxed in the sun (under our shade). It was plenty hot! 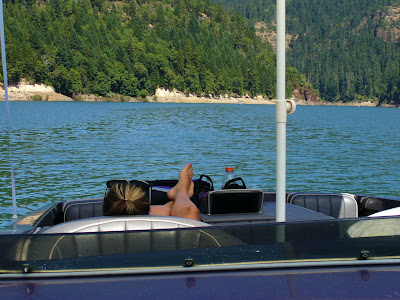 We did nearly kill some idiot on a personal watercraft who was paying ZERO attention to his surroundings. We were traveling at speed, keeping an eye on him because he was being erratic, when all of a sudden he turned across our path. Of course we slowed down, but there are no brakes on boats people! It was VERY close. Chris had to use reverse to keep us from just running the guy over. I was yelling at him; he had a little girl on the back of his craft, too. He just looked at us with total oblivion on his face. As Randy Cassingham (thisistrue.com) would say, this guy was an obliviot! (Oblivious-Idiot). I sure hope that the little girls parents read him the riot act. He was completely in the wrong and oblivious to our approach. Then when he did see us, instead of taking ANY sort of evasive action he just stared at us. COMPLETE moron. I really wanted to go find him later and tell him "you're welcome...you get to go home tonight because WE were watching out for YOU."
Anyway, other than that bit of excitement, we had a great time. It was super busy at the dock so for the first time EVER I dropped Chris off and backed the boat back out and waited away from the dock, rather than tying up, and then pulled the boat back in right onto the trailer. Easy Peasy! YAY Me! I couldn't have done it without all the upgrades we (Chris) made to the boat this spring. It drives SO much better and the reverse works very well.
We had to get back to town though because we had tickets to see Chris Isaak perform live at the Britt Festival. (brittfest.org)  The Britt Festival is an annual outdoor concert series held in Jacksonville, Oregon each summer. There are a variety of bands and singers that come starting in early summer. This summer's lineup included acts like Willie Nelson, The Charlie Daniels Band, The B52's, Cheap Trick, Chris Isaak and many more. The concerts are held at an outdoor amphitheater in downtown Jacksonville. Seating consists of blankets or shorty chairs on a grassy hillside, unless you buy reserved seating in the front.
The venue is gorgeous, though the visibility of the performer is limited. The festival "rules" are great, though! You can bring in your own food, beer and wine or buy what looked like really yummy and reasonably priced food, local beer and wines at the event. We didn't have to pay for parking, there was no traffic getting to or from the venue, we didn't get searched on our way in and we saw an excellent performance.
Chris Isaak is really a great singer. He did several of his own hits, along with a few new songs from his upcoming album. In addition, he did several covers of old classics like Jerry Lee Lewis' Great Balls of Fire, Elvis' Can't Help Falling In Love, Roy Orbison's Pretty Woman, and several others. He played past the cut off time and came back out to perform 4 songs for the encore. He wrapped it up with his classic Forever Blue. He also did a great job entertaining and interacting with the crowd. Early in the concert he came out into the crowd to shake hands and mingle a bit; later he called a couple ladies up on stage to dance with his bass player. It was just a fun night and a really lovely evening to enjoy a superb live music performance. We will definitely be going to the Britt Festival again.
One funny part was the people watching. Oh my goodness! People just didn't know what to wear...some people were dressed to the nines...women in high heels and sequined tops, and other people were ultra casual...one woman had her belly hanging out and another guy had on super ripped up cut-off jeans. Plus the guy in the kilt with matching flip flops. GREAT people watching! Let's just say it was a great place to wear some khaki shorts and a t-shirt. Plus...what is the DEAL with all the tattoos? Everyone has a tattoo these days. Crazy.
All in all it was an excellent Saturday.
Sunday was all about the garden. We started a German Rumptopf with a bunch of fruit, rum and sugar. We'll see how that turns out. It is a process that traditionally started in the early summer with the first fruits of the season. That would be added to a large crock or glass jar and then topped with sugar and rum. Later when other fruits were ready, they would be layered into the crock atop whatever was already in there, with more sugar and rum. These days with all the fruits available, we just got a big ole jar and started layering stuff in there. We didn't add the sugar and the rum until the end, which may turn out to be a not so great thing, but hey...it's a fun expiriment! We are going to add more fruit and then see what happens! It is supposed to sit in the rum and preserve itself for 6+ weeks. Traditionally rumptopf was served around the holidays. We'll see if we can wait that long! 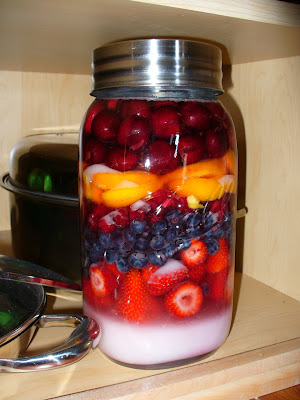 We also made one jar of refrigerator dill pickles.
We picked some plums off of our thundercloud plum tree and froze them.
We bought 20 pounds of peaches and started the process of dehydrating some of those.
It was a day spent in the kitchen. We finished it up by making a delicious dinner of grilled salmon, a big baked potato from our own garden and a fresh sesame cucumber salad with cucumbers and radish from our garden. DELISH!
Today my lunch was a bit of leftovers. Yummy! 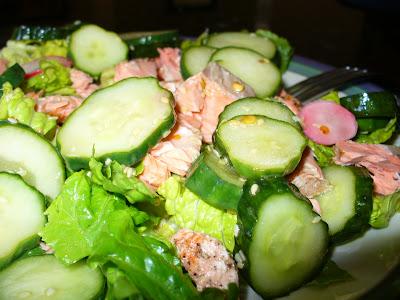 It's getting late, but tomorrow I'll give you the recipe for the cucumber salad!


It is so lovely living here in Southern Oregon where we have such a variety of things to do. I didn't feel that way when we first moved here, but I am feeling really blessed and lucky that I get to LIVE such a full life here.
Did you have an excellent adventure this weekend? Leave a comment and tell me about it! Or tell me why you love living where you do.
Posted by Corrie Beebe at 9:46 PM