It's All About The Corn - Eat Local 5

I really cannot devote an entire weeks worth of posts to eating local and not comment on the corn issue.

Corn isn't really an "eating local" issue, but more of a "what have we let agribusiness do to us" issue.

I am already overwhelmed with what I want to say about corn, corn production in this country, agribusiness and the FDA, biotechnology, farmers, farm-aid, and what corn has become. There is SO much to say, and I could write a blog about it every single day and still not say everything.

Corn is actually a grass. It is one of the most prolific grasses on the planet.

It is massively adaptable to numerous climates and conditions. There are hundreds of varieties of corn.

The Indian and Aztec peoples of what is now Mexico relied on corn (maize) as a staple of their subsistence. Corn was sacred to them.

Corn, being such a prolific grower, soon caught the eye of biotechnology and agribusiness. At one time corn was one of many crops planted on the huge farms of the mid-west. As biotech and agribusiness got into bed with the FDA and other branches of the US government, they started changing things for our farmers.

It used to be that farmers planted sweet corn (the type humans eat at barbeques) and they were subsidized by the government as a buffer for years when the harvest was not as good due to things like weather and corn worms.

As biotech companies like Monsanto and Dow Chemical began manipulating the DNA of plants like corn, they realized that they could turn corn from a food crop into a commodity crop. The farm-aid bill changed and farmers were no longer subsidized during times of hardship. Rather the price of corn was KEPT LOW no matter the market situation. This isn't really a good thing for the corn farmers. They struggle to produce the corn at the pittance of below market price and they go farther and farther into debt.

The majority of the corn that is grown in the US now is not sweet corn. It is called grain corn or or field corn. This is what the EPA has to say about corn grown in the United States:

Corn: The United States is, by far, the largest producer of corn in the world. Corn is grown on over 400,000 U.S. farms. In 2000, the U.S. produced almost ten billion bushels of the world’s total 23 billion bushel crop. Corn grown for grain accounts for almost one quarter of the harvested crop acres in this country. Corn grown for silage accounts for about two percent of the total harvested cropland or about 6 million acres. The amount of land dedicated to corn silage production varies based on growing conditions. In years that produce weather unfavorable to high corn grain yields, corn can be “salvaged” by harvesting the entire plant as silage.


According to the National Corn Growers Association, about eighty percent of all corn grown in the U.S. is consumed by domestic and overseas livestock, poultry, and fish production. The crop is fed as ground grain, silage, high-moisture, and high-oil corn. About 12% of the U.S. corn crop ends up in foods that are either consumed directly (e.g. corn chips) or indirectly (e.g. high fructose corn syrup). It also has a wide array of industrial uses including ethanol, a popular oxygenate in cleaner burning auto fuels. (source) (emphasis added)

Corn is no longer a food product in this country. It is produced as a way to make other stuff.

EVERYTHING is made from corn.

Corn and corn based products include the following:


Corn is used in paint, ethanol gasoline, corn chips, high fructose corn syrup, and so much more. As Michael Pollan says "Don’t get fuel for your body the same place your car does." Meaning: don't buy "food" at the convenience store where you get gas...there is nothing but corn in there! Corn masquerading as cola, chips, crackers and the packaging all that stuff is wrapped in, in addition to the corn in the gas you are putting in your gas tank.

Neither people, nor animals, were meant to live on a diet of corn alone. Corn is not even on the natural diet of livestock like beef, which is where a majority of the corn ends up, on some feedlot fattening up a cow in 1/3 the normal amount of time. Gee, is there any wonder we have an obesity problem in this country?

It is ALL about the corn.

And the corn is in EVERYTHING!

So, my point for today is that overall, in general, you should try to limit the amount of processed food, fake food, chemically laden food, packaged food, and "food-like-products" (Pollan) that you buy and consume in your life.

Skip the middle sections of the grocery store. Shop the periphery for vegetables, fruits, local dairy and sustainably raised, grass-fed beef. Shop at farmers markets or join a CSA. Avoid eating at the convenience store or fast food restaurants. Limit your exposure to soda and high fructose corn syrup.

This doesn't mean you can't eat actual, real, locally grown sweet corn. That is great stuff! Delicious and nutritious! What it does mean is that you may want to consider how much corn you are eating in your day to day life without even knowing it.

So, for day five: skip the corn products! Eat real corn from a local farmer.

Soak it, husk on, in some water for five minutes. Throw it on a barbeque grill (gas or charcoal) turning every few minutes until it is nice and steamy hot. Let it cool for a few minutes and then shuck it...the silks will slip easily off and you will have delicious, healthy sweet corn!

And at casa Beebe we ate locally grown stuff!

Breakfast for me was toast with pb&j..J from locally grown logan berries that I made into jam. Lunch for me was more leftover pasta from the other day with garden tomato sauce and herbs. Dinner. Ah Dinner. 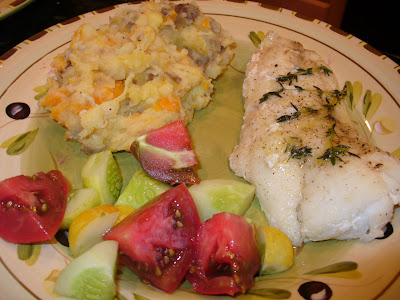 Grilled NW Cod, topped with thyme from my garden, served alongside Lemon Cucumber and Cherokee Purple tomato salad, and a mash of carrot, pattypan squash and russet potatoes, all from my own garden. The only thing on the plate I didn't pull out of my own garden was the fish.
Having a garden is SO awesome. And delicious!!
Have you read Michael Pollan's The Omnivore's Dilemma or In Defense of Food? Have you watched the movie Food, Inc.? Are you aware of the biotech takeover of food in this country? Does it shock you to know that corn is in EVERYTHING???﻿
Posted by Corrie Beebe at 2:50 PM