Chris and I have talked about going Charter Fishing, oh, about a million times in the almost twenty years we have been together. Guess what!? We finally got around to it!

We left Friday afternoon and headed toward the coast. We got a much later start than anticipated because (of course) Chris' pager went off mid-morning and he had to drive EAST to Klamath Falls, which is about an hour and a half in the wrong direction. Then he had to fix an elevator, and then he had to drive an hour and a half back home. AND THEN we finally were able to get on the road heading the proper direction (WEST-which is where the ocean is located...well at least here on the "west" coast). Anyway, we had planned to have dinner at the beach, but our late start meant we were stopping somewhere along the way.

Let me interject here just for a moment that there really isn't much "along the way" between here and the beach. It is miles and miles of highway and "blink and you miss them" towns. In fact, the couple of times prior to this that we have stopped along the way, it was either really not good, or the places were all closed because it was Sunday afternoon and who on God's Geen Earth eats at a restaurant on a highway home from the beach on a Sunday Afternoon?!?!  Apparently no one, because the restaurants were all closed.

Anyway, just outside of Grants Pass there is a little, unassuming looking "house" that has been converted to a "restaurant". Chris drives by it every time he heads out to work at the beach and thinks" I wonder if that place is any good?" They always have Friday specials like Prime Rib or Rib eye steak dinners. Well, we decided to stop and check out the Rib Eye special.

At first, I must tell you I was a little concerned. We walked into a very dark bar, with a very small (4 tables) dining area. The actual bar was already full with patrons at 5:15 pm on a Friday night. We sat at one of the four empty tables. In the dark. The music was loud (Marvin Gaye!) and the crowd at the bar was boisterous.

After a moment or two the bartender woman came to our table to get our order. She was friendly. She took our drink order and left. She came back and I inquired as to the name of the establishment. She said "Kate's Redwood Bar and Grill, and I would be Kate."  She came back a minute or two later and asked if we were "new". LOL I told her we weren't "new people" but that it was our first time stopping in at the restaurant. She then proceeded to inquire as to where we were from, and we chatted a bit. Then she sent one of the bar patron locals over to say hi, introduce herself and make friendly. Then she sent her daughter, who works there with her, over to say hi, introduce herself and make friendly. It was the funniest, friendliest welcome I have ever had to a little hole in the wall place ever! It was great! We laughed and joked and then had a delicious dinner of Rib Eye, mashed potatoes with the fixin's mixed in, green beans and then dessert (all for $19!!). The desserts were awesome...a little tiramisu and a little carrot cake. YUM. Chris said he would go back there just for the desserts! So, even though from the outside it is a little uhm...questionable (really it is perfectly nice, but I always question little bars on the side of the highway), it is really a great, casual, fun place to go that also has great food! There were a ton of regulars that stopped by and everyone just ordered the special. No one was looking at a "menu". "We're gonna have the special, Kate!" Anyway, if you ever are driving to the beach outside of Grants Pass, Oregon and need to make a pit stop, check out Kate's Redwood Bar and Grill at 12235 Redwood Hwy, Wilderville Oregon. Tell Kate that Chris and Corrie sent you!

After that we headed off down the highway to Brookings. We stayed, as usual, at the Best Western Beach Front Inn. Every room has a balcony that looks out at the ocean. It was so gorgeous! Cool, but not cold. The sky was clear; we could see the stars and the Milky Way. We could hear the clanging of the bell on the bouys and the fog horns. We enjoyed a bottle of 4 buck chuck and headed to bed. Unfortunately, we hardly slept due to a variety of factors. It made for a long night, especially since we had to be up EARLY (5:30!) to get ready, have some breakfast and make it to the charter boat. Let's just say I was a little, uhm, grumpy first thing in the morning after a night of almost no sleep, which was preceeded by 3 nights of very little sleep. FUN FUN.

It was dark and chilly when we first boarded our vessel, the Super~Star. The sun was just rising and the sky getting light by the time we headed out to the ocean. There was about 20 people on the charter. We headed north out of Brookings-Harbor for about 20 minutes or so. The Super~Star was built in 1977 and is a fiberglass hull fishing boat, with a maximum speed of 16 knotts. 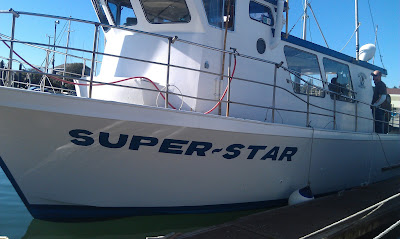 As we reached our first fishing hole the sun rose brilliantly above the coast range mountains and glittered like gold across the mostly calm (for the ocean) water. Speaking of, the water was gorgeous all day. It wasn't rough at all. We, of course, did experience a few unexpected swells, but mostly it was just a really beautiful day with gorgeous water, cloudless blue skies as far as the eye could see, and sun sun sun! 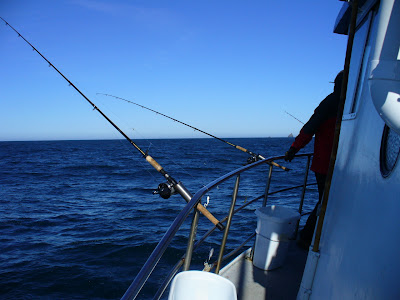 We had worn multiple layers of jackets and sweatshirts, brought gloves and hats, but forgot our sunglasses! We could have used them. We were quite thankful for the multiple layers, because we layered them on and off and on as the day went on and depending on if the side we were fishing off of was facing the sun or in the shade. There was a bit of a chilly breeze, so if we were in the shady side it could get pretty cool. 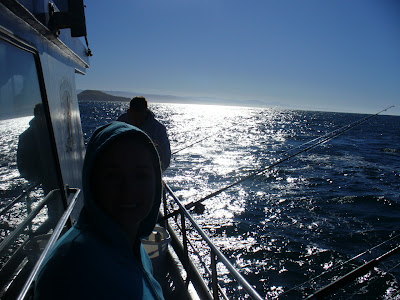 Now the important stuff! We were fishing for a variety of rock fish and ling cod primarily. We started fishing, poles in the water, by 7:45 or so. IMMEDIATELY people started getting bites and we started hauling in black snapper, some yellow tail and ling cod. BAM. Bam. Bam. People pulling them in all around us, and we were, too! A couple different people on the back of the boat immediately hauled in HUGE ling cod (which are UGLY!). 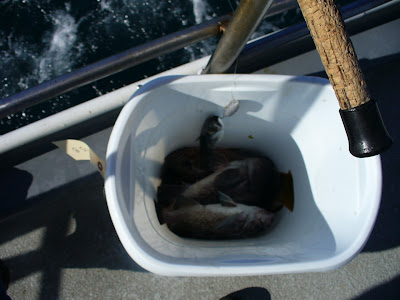 It was unfortunate that salmon season in the ocean was closed because 3 different big, beautiful salmon were caught yesterday. We had to let them all go! We didn't catch any sharks or other crazy things. One guy caught a "china". Not sure, but it was an unusal fish to be catching that time of year, according to one of the boat hands. A few people pulled in some mackeral, including Chris, which the boat guys told him to leave on his rig to use as bait. In all, I ended up catching 1 medium ling cod, a couple different black snapper and two yellow tail. Chris caught several black snapper, a yellow tail and the mackeral. He didn't catch a cod :( bummer. 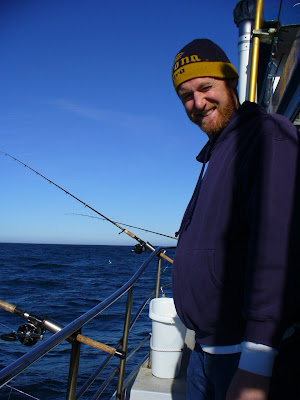 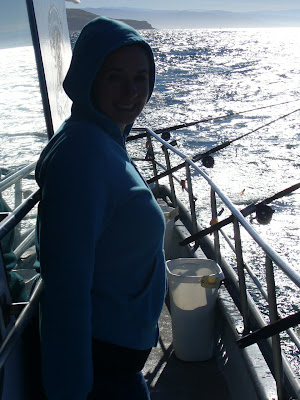 The cool thing? The boat crew made sure that everyone reached their limit on rockfish. Basically, people like me got the benefit of the better fishermen on the boat, because they would keep everything, after their limit the boat crew divvied things up so everyone that was out there got a full limit of rockfish. That was awesome!

We were out there for about 6 hours. The weather was gorgeous, the seas were calm, the fishing was good. It was really a great time and we are excited to go try our hand at charter fishing again soon! 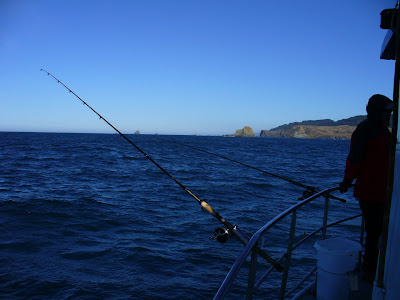 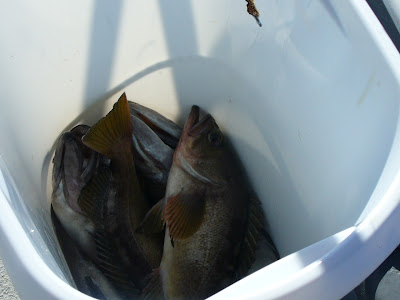 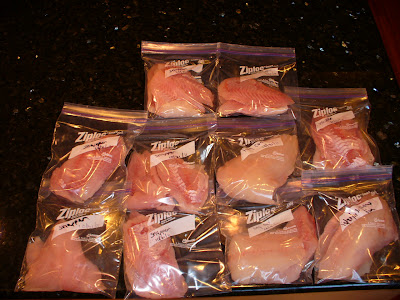 In all we ended up with about 8 lbs of fish, fileted by the lovely boat guys. We are looking forward to some yummy dinners, including fish tacos!
Posted by Corrie Beebe at 2:38 PM