I have heard some really positive feedback from a few people about the recipes and food pictures I have posted. Thank you for that! Your comments and feedback are so great to hear and read; I really appreciate knowing that my creative endeavor, both with this blog and the stuff I post on it, is enjoyed by others.

Because I know you all love food as much as me, this post is about some of the dinners I’ve made lately. Nothing super crazy or exotic, just some good, basic food that turned out delicious. 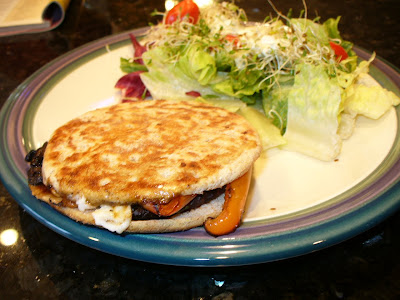 Okay, I know the photo doesn’t really look all that appealing, but trust me, these were quite tasty! I had never made Portobello mushrooms before, so I have to give a shout out to my friend Alison who gave me some tips.

This is what *I* did, so any errors or incorrect procedure is mine completely.

Take two Portobello mushroom caps and clean the gills out of the underside with a spoon. Place the cleaned caps into a bowl with some balsamic vinegar, olive oil, minced garlic and pepper. To that bowl add 1 red/orange/yellow bell pepper (seeds and membrane removed). Toss to coat.

Turn on your broiler to high heat. Place the mushrooms and the peppers on a baking sheet under the broiler for about 5 minutes, flip over and stir around the peppers. Broil for another 3-5 minutes, or until the peppers are starting to char a bit.

The rest of the recipe is adapted from another Cooking Light recipe. I took a thin bun and placed some raw cheddar goat cheese, the mushroom cap and half the peppers on one side and put the other bun on top. Place these back on the baking sheet. Put another heavy pan on top of the “burgers” and kinda smoosh them down. Leave the pan on there (I used another big broiler pan-you could use a cast iron skillet, too) and broil for another few minutes, flipping part way through, until they are heated through, cheese is melty and they look done.

Remove, careful of the hot pans, and ENJOY!! 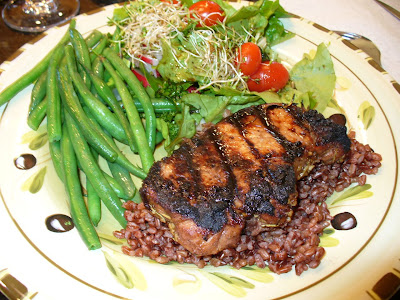 Chris said these might have been the best pork chops he has ever eaten. Well, I don’t know about that, but they were pretty damn tasty. Remember, most of my measurements are approximate. I usually just toss some in there and mix it up. Season to YOUR taste!

Place all ingredients in a zip top bag, close bag and shake around real good to mix everything up and coat the pork chops. Set aside while you make the rest of your dinner and prepare your grill. Periodically go shake up the bag a bit and flip it over to keep the marinade coating the meat.

We cooked these on the bbq, but you could broil or pan grill them, too. Cook 8-10 minutes per side, depending on thickness of chop and your preference on doneness. Pork should be white throughout and heated to an internal temperature of 160 degrees.

I served this on a bed of red rice, with some crisp steamed green beans and a salad with balsamic vinaigrette dressing.

As I said, Chris loved these, so they might be worth a try! 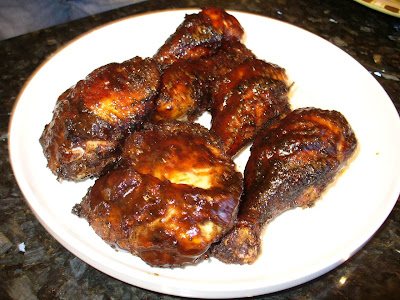 This was a pretty tasty dinner, too. If I make it again I might add a little sweetness to the rub, maybe some brown sugar. The bad part about adding any kind of sugar to a rub is that sugar burns very easily on the grill, so adding sugar can be tricky.

Place spices in zip top bag. Add chicken pieces (patted dry if you washed them or they are wet from defrosting-this helps the rub stick). Close bag and shake it around like crazy to coat the chicken pieces. Place the chicken pieces on a hot bbq grill, just off to the side of the heat so they don’t burn. Bone in chicken cooks better over an indirect heat to start with as this allows the chicken to cook through without burning the outside. Cook until the juices run clear. NO pink!

I used a store bought bbq sauce at the very end of cooking time. Take a little less than a tablespoon per piece of meat and mop or baste with the sauce. Cook a bit longer on the grill so the sauce kinda cooks on the chicken. Watch for burning! Most barbeque sauce has sugar in it, which again, burns quickly! After the glaze has kinda set, you are ready to eat!

Using both a rub and a sauce on the chicken gives them a bit deeper flavor seasoning, in my opinion. Otherwise, if you just use a sauce, once you eat the skin off, the rest of the chicken doesn’t have any of that yummy barbeque flavor. A rub helps that flavor permeate the meat a bit more and it sticks to, not only the skin, but the flesh underneath as well.

Of course, barbeque chicken is awesome with any summer side like grilled corn on the cob, baked beans, coleslaw or pasta or potato salad.

I hope you enjoy some of these dinner ideas! Let me know if you try them and how they turn out!
Posted by Corrie Beebe at 9:34 PM