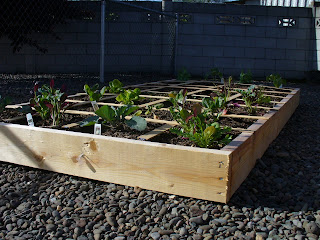 Chris and I like to try and grow things. In the past 12 or so years we have had a couple of different garden attempts. When we lived in Beaverton we had a huge yard and did the whole till up the soil, make rows, plant stuff garden. I don’t recall exactly how that turned out, but I don’t recall it being a huge success.

Later, when we moved to Tigard, we did some container gardening and depending on the year, it went okay. Common crops were lettuces or herbs, and tomatoes. We had strawberries one year, but it takes a lot of strawberry plants to get a decent amount of yield.

A couple of years ago we had an okay crop; we got some carrots and broccoli, some tomatoes, some beans, but it was still not a great garden.

Last year our garden failed pretty miserably, except for our tomatoes, which went gangbusters and I turned into one of those crazy gardener people that was giving away tomatoes by the bag to anyone who would take them! This was from only two plants!

This year, with our move to Southern Oregon, a warmer climate, and a side yard that was all rocks, 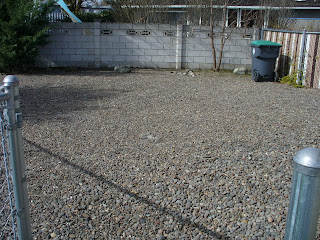 Chris and I decided to try our hand at Square Foot Gardening. Square Foot Gardening is the brainchild of Mel Bartholomew, a retired engineer who felt that single row gardening was too much work, too many weeds, and a waste of space. I had stumbled across his method sometime in my past but had not pursued it. This year, Chris and I decided to try it out.

The first thing to do was to build the boxes. Mel suggests a 4’ x 4’ square, but we opted for a 4’ x 8’ square. We (meaning Chris) built five boxes, one of which is 12” tall instead of 6” tall, so we can grow root vegetables that need more than the 6” depth. 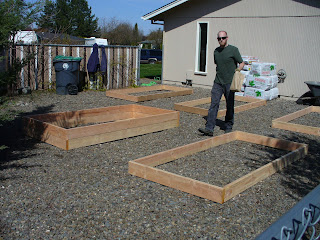 The next thing to do was to add the dirt. Mel calls for a mix of 1/3 compost, 1/3 peat moss and 1/3 vermiculite. Well, large quantities of vermiculite are near impossible to come by. A small bag, about the size of a cereal box, was quite expensive and nowhere near the quantity we needed. So, instead we used a mix of locally sourced garden compost/dirt, some bagged compost-with a variety of ingredients, including chicken manure, worm casings and several other items, and the peat moss. Here’s hopin’ it works good enough! 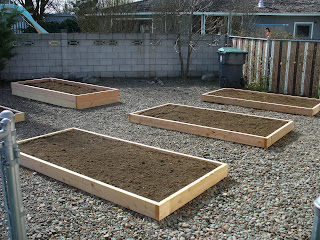 That was a sunny, early spring day the end of March, which is too early to be planting at 1400’ above sea level in a Southern Oregon mountain valley. So, we had to be patient and wait.

We waited about a month. Our local county extension service puts the last frost date of our area at April 28th, which turned out to be fairly accurate, as the lower peaks around the valley were still getting snow this past week (about 3000’ level).

So two weeks ago today, on Sunday April 18th, our patience had worn out and we decided to plant our Square Foot Garden. Now, it’s called Square Foot Gardening because you take your box and divide it into square foot sections. Then you plant each square with 1, 4, 9, or 16 plants, depending on what you are planting. For example, one cabbage plant goes in one square, but 16 carrots are planted in one square. This is where the utilization of the space comes into play. 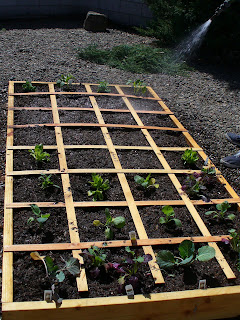 We filled four of the five boxes, placing the items in various squares throughout the boxes, which is a way to make the garden look pretty as well as handle crop rotation.

Some of the items, like the tomatoes, lettuce, broccoli, cabbage, peas and a few others, were planted with starts (plants that are already green and growing), while most of the garden was planted with seeds.

Today is two weeks since we planted and we are excited by the progress! We have had some rainy weather and some cold, but our garden seems to be holding up. We have also had two weekends that have been very warm and sunny.

Already we have sprouts!! The radishes sprouted after only one week! 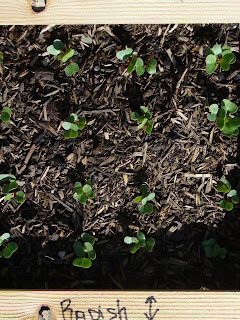 They are going strong and looking good! Yesterday morning we didn’t see any additional sprouts, but after a day of warm and sunshine we have more! The dill, a pickling cucumber, 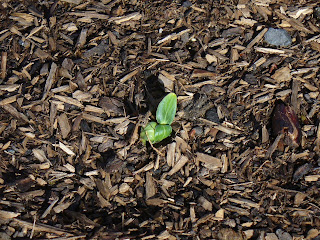 and some carrots have all sprouted. We are excited to check the progress again tonight and see if a few more little friends have joined our garden!

We still have one box to plant, but aren’t sure what we are putting in there yet. We might do some corn and melons, but haven’t decided quite yet.

I will continue to periodically post about our progress and (hopefully!) the bounty of our harvest!
Posted by Corrie Beebe at 8:52 AM

Okay, I'm hooked. I saw a couple of 4 x 4 'starter' raised garden kits at home depot--going to pick them up shortly! :)

Awesome Mar! I hope that your garden produces awesome stuff for you. Thanks for checking out my blog, too. :D