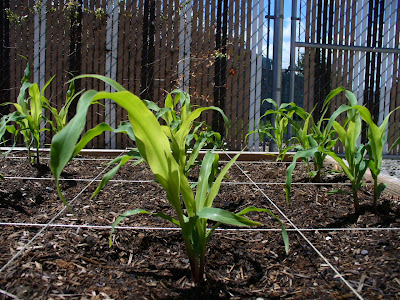 The weather the last week or so was very typical spring weather, cool and wet. Now it’s Memorial Day weekend and the skies have cleared, the sun is out and my garden is looking pretty happy!

We went a few days ago and purchased some more starts to plant. The basil and chives we planted with seeds in April never sprouted, neither did most of the acorn squash, and most of Chris’ peppers. So we decided to buy starts of those things and few others to fill up the rest of our boxes.

New additions to the garden: 3 varieties of basil, including lemon basil, chives, some new lettuces, edamame, purple cabbage, another acorn squash start, a whole bunch of pepper varieties, a watermelon, a cantaloupe, and a spaghetti squash. (I think that’s it!)

Everything we planted, with the exception of the watermelon, is looking good. The watermelon looks a little wilty. I hope it perks up. I went and messed with it a bit, but who knows?

I pulled the broccoli as it was just going to flower. We didn’t really get anything from that, I think we planted too late.

I spent some time the other day trimming some of the lettuce, harvesting some lettuce and radishes! Look at those beauties! 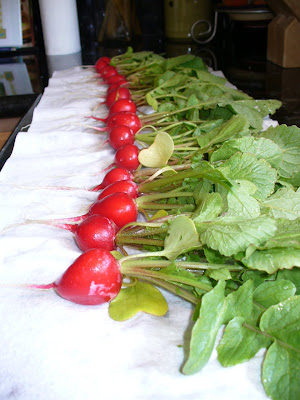 I also found a bunch of slugs trying to feast on my radishes and lettuce. So, I went and poked around through the lettuces and radishes and pulled the slugs off. Fun!

The potatoes have gotten huge! I have hilled the dirt up around them and, I guess, we continue to do that until they flower. 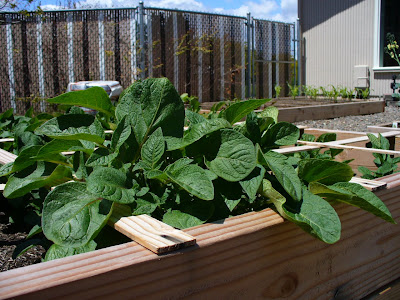 The potatoes are a pretty interesting experiment! As another experiment Chris wants to plant some garlic, so I might pick some up at the store this weekend.

We found a couple of nightcrawlers the other day so we tossed those in the garden to help with the soil.

We are not sure how our lemon is doing. A few weeks ago it had a zillion fragrant blooms, and then a bunch of little tiny lemons, but they look kinda black now. Not sure what happened or if that will perk up in the heat or what.

We are really enjoying our garden. We put a couple of chairs out there and spent about an hour out there tonight enjoying the sun, the plants and nice beverage. It is relaxing and peaceful.

As for the harvest, well, I figure we’ll either end up with so much stuff that we will be buried under produce, or we’ll end up with stuff not turning out. It’s a fun process for us anyway.

We are contemplating a few other fruit bearing plants as well, so I’ll keep you updated if we decide to do any of that.

Enjoy a few photos of the boxes just after planting the other day. 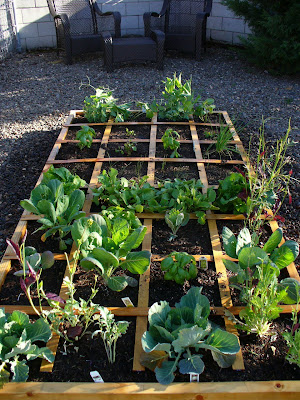 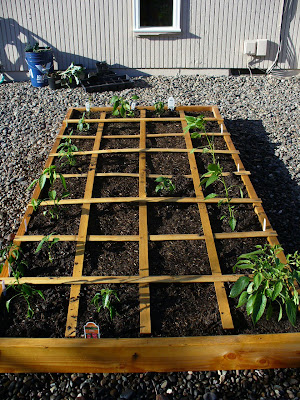 Your garden looks great mine has nothing to chat about since we have been at freezing temps almost every other day since I planted the garden. My mom asked today what all the weeds were in my garden I told her one time Grandma came and brought me a start from her mint and planted it and it has now spread through out the garden. She had me pick her some and added it to her rum and coke lol. I've never grown basil before but I am addicted to it like cilantro so yummy when it is fresh.

Thanks Marcela! I love basil, too. It is so good when it's fresh; I feel like I can add it to anything. I think your mom had the right idea with the mint....lol!