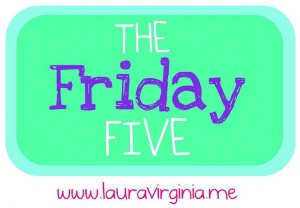 For one of my classes I was obligated to purchase a subscription to The Wall Street Journal. I am opposed to this for several reasons, the biggest is that there is plenty of "good" news sources available for free online, and the other main reason is that now I have a newspaper showing up on my doorstep six days a week. I don't have the time or inclination (or need for the class) to read the paper every day because I get the majority of my news online. AND (this so annoys me) NOW I have to dispose of said (mostly unread) newspapers each week. In the digital era, dear instructor, this is so unnecessary. Anyway, so, I am skimming headlines and perusing articles from the paper. Sporadically. But mostly, they pile up around the house until I have completed the required assignment, making my house look messier than normal, and then I have to pay to recycle them. Lovely. As if education weren't expensive enough.

*edit-I see I talked about this on the last Friday five...apparently I wasn't yet as annoyed with all the newspapers all over my house! 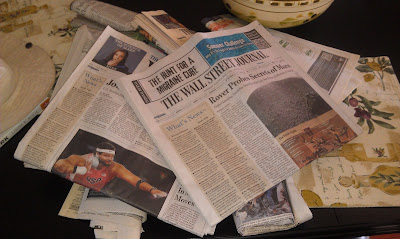 Now, this lovely stack, is a mixture of text books and research books for a paper I am writing. I will be skimming, perusing and flipping through each of these tomes, in addition to various online articles and texts in order to write a paper about corn, the global food supply, communication and conflict. In fact, a great article just showed up about why YOU should be concerned about the drought in the US.

Think you shouldn't care about the drought?  Click the link there and see why you should.  ﻿ 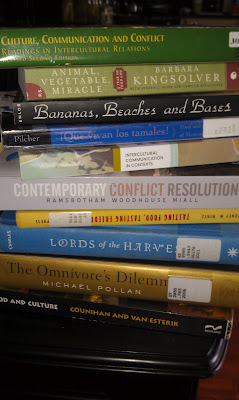 Okay, for some reason I just love this song. I haven't watched the video (it already looks weird) but I dig the song. Gotye, Somebody I Used to Know.

A Place Called Chiapas is a documentary film about the Zapatista uprising in Southern Mexico in the early-mid 1990's, particularly after the North American Free Trade Agreement (NAFTA) was put into place between Canada, the US and Mexico. I wanted to really get a lot out of this film. I admittedly know very little about NAFTA or the Zapatista's. I was hoping to get much more detail about both, than what this documentary provided. It did show me some very interesting information about the campesinos of Mexico, and how their lives and needs intersect, sometimes violently, with other groups and the government of Mexico. I would call it a 10,000 foot overview of some of the problems in Mexico, but not an in depth exploration, which is too bad because I was hoping it would inform my above mentioned paper a bit more. 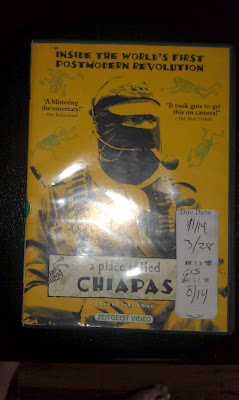 On a more fun note, I watched all three of the Bourne movies over the last week or so and was reminded how much I enjoy them! I had no real interest in seeing the latest film, mostly because I didn't see how they could make another film without Matt Damon, but after watching the previews I am kind of excited about the new film, too! ﻿ 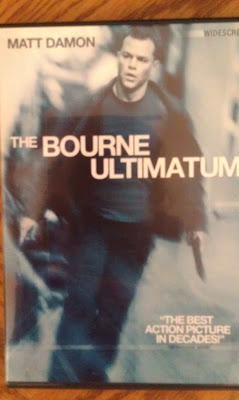 ﻿
And on an even FUNNER note, I had not even heard of this movie until today, but am totally making Chris go see it with me. This looks HILARIOUS and...I do love me some Tommy Lee Jones, and Meryl Streep. Hope Springs.

The short answer is food from the garden, in one form or another, and lots of it! Having a garden is awesome! I have made a variation of this dinner of pasta, pesto and veggies three times in the last week. It is always good, a little different every time, and sooo fresh! 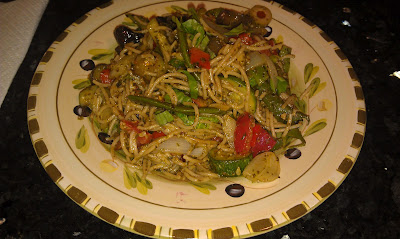 I didn't take a picture but last night we had tacos that were stuffed with peppers, tomatillos, tomatillo sauce all from the garden, plus black beans, onions, garlic and chicken. Chris had his with his own homemade cayenne pepper sauce, too. So delicious!

We also had leftover corn poblano chowder from earlier in the week, which was also filled with our own garden fresh delights!

Earlier this week I made salmon steaks and seasoned them with fresh thyme from the garden. We are still eating lots of cucumbers, zucchini and eggplant. Love it!!

I need to find a good number five. I don't have time to visit pinterest. I sometimes put what I'm thinking or what I'm looking forward to, and I suppose I could keep #5 open as a whatever strikes my fancy, but I'd like to have something to put there each time. Any suggestions?

For now I'll tell you what I'm looking forward to: being done with summer session of school. It hasn't been bad, but I will be glad to be done and have a few weeks to myself before I kick off a very heavy fall term. I have 7 months until I graduate. It will fly by, but some of it will be challenging. So, in this moment, I am looking forward to wrapping up summer session, and having a few short weeks to breathe and shift my focus, before diving back in to a more than full time schedule come fall.

Bonus #6: If you want to waste five minutes of your life watching me and Roxie play...