A couple of weekends ago Chris and I decided to head out to our local outdoor shooting range and put some rounds through his guns. Now, let me start by saying that I am not a huge fan of guns, and in fact it took Chris something close to 20 years to convince me that it was okay to have guns. I don't have anything specific against guns, other than they are so unforgiving. One little mistake and that can be the end. Anyway, part of why we decided to go out and shoot the guns is to that I could get a level of familiarity with them. I mean, they are in my house and I have access to them, so I should have at least a rudimentary knowledge on how they work, for my own safety.

I have gone out shooting only once or twice before in my life, but it turns out I am naturally a pretty good shot. :-)

Chris started off shooting his pistol. It is LOUD. 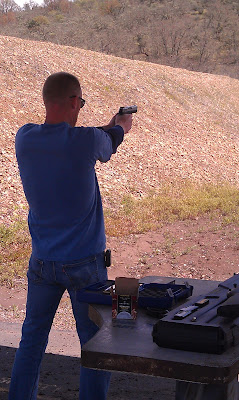 Then I shot the pistol. Uhm...or rather I *tried* to shoot the pistol. I literally could not fire it. Apparently the trigger is very heavy (<--gun lingo) which is a safety feature of sorts I guess. Anyway, after much effort I managed 3 shots. That was it. A little later that afternoon I managed 3 more shots, but I did not have enough strength in my finger to actually make it fire. CRAZY! Chris thought that it was malfunctioning! Nope...just weak baby fingers, I guess! 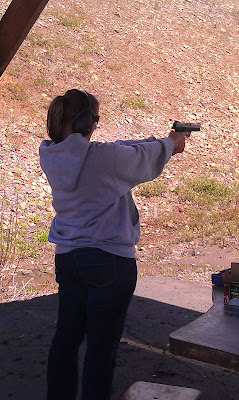 Then we went on to shooting the .22 rifle. This was much more my style. Easy to load, aim and fire. No difficulties and I was pretty darn accurate. 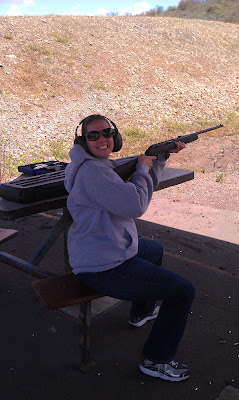 We each took a few turns with the .22. I shot it several times. I liked it. 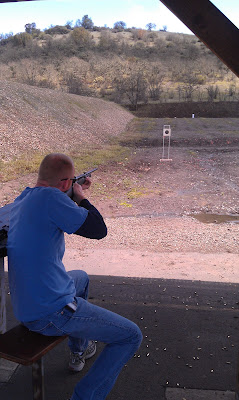 The last one we shot was the 12 gauge shot gun. Yes, it is hella loud and yes it packs a helluva kick! My shoulder was pretty darn sore the next day. 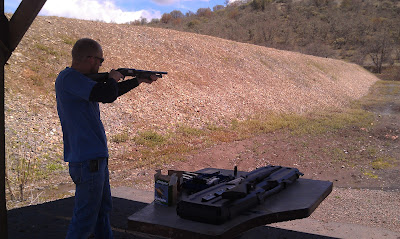 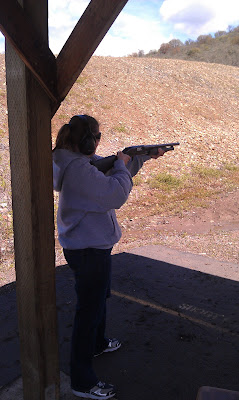 We had a really good time. The place we went is very nice, well-kept and monitored by volunteers. Everyone was very respectful and careful. That alleviated a lot of my fears and I was able to relax and enjoy the afternoon. Of course it helped that the sun was shining and it was a lovely day.

I am actually looking forward to the next time we head out for some target shooting. I am getting more comfortable with the guns and that is a very good thing safety wise.
Posted by Corrie Beebe at 3:25 PM