My Review of Square Foot Gardening by Mel Bartholomew

In one of my early blog posts, I talked about the process we were using called Square Foot Gardening as created by Mel Bartholomew.

Mel is a smart guy, but Mel is an engineer by trade. If any of you have ever known an engineer then you might understand what that means. Mel is very methodical and has a "set" idea about how to do things. What I have found is that what worked for Mel didn't always work for me, and so I have made some adjustments.

First of all Mel says in his book that plants only need six inches of dirt to grow in, except for some root vegetables like carrots, parsnips and potatoes, which need at least 12 inches. With this in mind we built our first set of boxes using 2x6x8 boards. That is 2 inches, 6 inches deep, and 8 feet long. 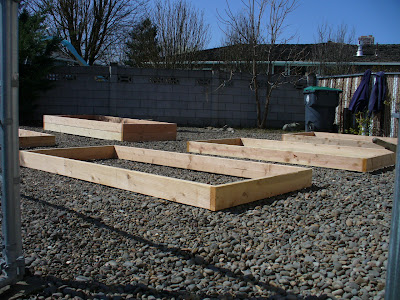 Chris and I have found that this really wasn't enough dirt for our plants to do well. For one thing the dirt compacts A LOT. What started out as fully filled boxes ends up only being about 4 inches of dirt by the time all the compacting has occurred. This year we built up all the boxes by adding another frame to each box. So now, all of our boxes are 12 inches deep like the one in the background of the picture above (which was used for root vegetables the first year and is now our potato box).

Another thing that Mel talked about was his "Mel's Mix" of soil, which he proclaims in his book to be the perfect mix of nutrients. Mel's mix is 1/3 peat moss, 1/3 compost, and 1/3 vermiculite. As noted when we first created the garden, vermiculite is not available in quantity here in S. Ore. So, that was problem number one. Problem number two was the idea that we needed so much peat moss. Some peat is good because it helps retain moisture in the soil, but our boxes ended up with WAY more peat than was needed and it actually prevented plants from growing in some of our boxes.

This year we added a significant amount of our own compost that we created, plus another several yards of regular dirt and "garden mix" soil. We had to get more dirt to fill up our double deep boxes, so it was a good opportunity to get the peat broken down and more thoroughly mixed in throughout the garden.

Mel also is a fan of the wooden slats to separate out the squares that make up the "square foot" garden. After one year of doing the wooden slats, Chris and I ripped them all out. 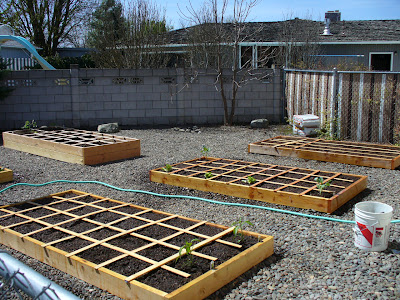 Yes, they look cool, and I can see how an engineer like Mel would be seriously enamored with them, but in my opinion, they just don't work.

What I mean is that they take up quite a bit of the overall space available, and they are not very forgiving when trying to remove plants that are done and add new plants. They ended up being a pain to deal with. Mel is against using twine, but Chris and I have found that twine works great for us! We can re-string the boxes with ease if needed and the twine takes up much less space and is much more forgiving. For example, last fall I planted spinach and this spring it went crazy. We had pulled the twine off of that box and needed to re-string it this spring. It was very easy to manipulate the string around the spinach without causing damage. 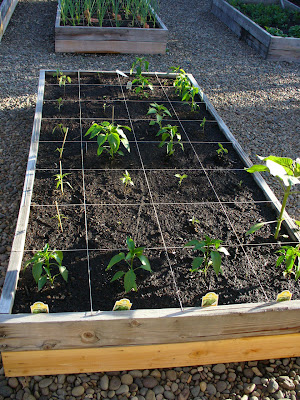 This picture shows the double deep boxes and the twine squares, plus the new mix of dirt.

Mel also argues that because of the perfect mix of soil the plants will need little to no fertilizer. Uhm. Well, I have not found that to be the case. This year in particular, I have been fertilizing with a generic miracle-grow type fertilizer every couple of weeks. This seems to help quite a bit. My soil still seems to be lacking in nitrogen or something because the plants start to yellow a bit, and then once we fertilize the yellowing disappears. Now, some yellowing is just natural, as plants get bigger and the older parts start to die off in favor of the newer growth, so don't freak out if the older parts of some of your plants yellow and die.

So, that is my review of some of Mel's gardening ideas. I do still (for the most part) follow his spacing, which is 1, 6, 9 or 12 plants per square depending on the plant (cabbage =1 per square, carrots = 12 per square) but I am not married to it and will often use my own experience instead of his guideline.

Overall: Mel gave me a lot of great ideas and the confidence to actually get started on a garden project. He had good advice: Don't start big! Don't plant stuff you won't actually eat! But I have also found that what worked for Mel doesn't always work for me. It is a great reference, and I still turn to it for information, but I turn just as much to people I know and the internet for answers and information.
Posted by Corrie Beebe at 8:00 AM

I like the idea of twine better too, Corrie. Just seems like the wood sections would be always in the way.

Good to know that yellowing could mean the plants need more nitrogen.

Thank you for your post. I have found over the years that what works for one doesnt always work for all. I have read alot about gardening and its all about observing what works in your environment and trying new things to solve a problem or sticking with something that works for you.