But have you heard about locavore?

The idea of a locavore is someone who eats food primarily grown or raised in their own local vicinity. "Local" means different things to different people, of course, but the idea is to eat food grown from local farmers, meat raised from local ranchers and to avoid contributing to the pollution of the planet by shipping bananas all over the world from South America using fossil fuels, as just one example.


In the United States we consume a tremendous amount of food that was grown somewhere else. We ship food from all over the world to our country, and then across our country, so that we can have bananas year round, tomatoes year round, strawberries in December and Oranges in August.

In reality, food does not grow that way. Oranges and other citrus fruits actually are ripe in the winter months, while strawberries are at their peak in June. Apples and Pears are fall fruits, along with corn and potatoes. Tomatoes would never survive in the cold of January, they too are a late summer or early fall fruit.

Bananas do not grow anywhere in the United States, yet in 2005 the United Nations said that 6.4 BILLION pounds of bananas were consumed in the United States. (source) All those bananas have to get here somehow, and that somehow is on big, petroleum driven, ocean polluting cargo ships. There is so much to say about the impact of just bananas on our environment, on the people and countries that grow and harvest the bananas, the corporations that pay nearly nothing for wages, and then the people of the US complaining about the cost of .89 per pound bunches of bananas. Then we have to multiply all that there is to say about bananas by every other type of fruit and vegetable that gets shipped around the world to our local supermarket.

The locavore movement was inspired in part by the desire to lessen our dependence on foods produced in other countries and to lessen our impact on the environment that these foods contribute to. In addition, the locavore movement brings attention to the health aspect of the food itself. It is commonly agreed that as soon as a fruit or vegetable is picked it starts losing its nutrients. How long has that fruit or vegetable been sitting on a cargo ship, and then packed into a truck and then trucked to your grocery store?

Saturday September 10th, 2011 was the start of Eat Local week here in Southern Oregon. As many of you may know, I support eating local, organic when possible. I grow some of my own food (about as local as you can get!) I purchase much of my other food from local farm stands, local butcher shops that source local meat and local fish. I keep my dollars in my community. I support my local farmer and my local food co-op. Even when it comes to my wine...I visit local wineries, buy local and support the small, up and coming vintners. Even things like my cottage cheese, yogurt and eggs are from local dairies and local chicken farms, that I purchase from a locally owned grocery store.

Does this mean I never buy bananas? No, but it does mean that bananas are not a staple of my food intake anymore.

This week I will be posting about some of what I eat that is local to support the locavore movement and Eat Local week. There are many similar type events going on around the country as the locavore, slow food, and farm to fork movements gain popularity. I encourage you to shop locally, eat locally, support your local farmers, visit a farmers market or farm stand, keep your money in your local economy and help diminish our reliance on oil and importing our food from elsewhere.

So, what did I eat saturday for my locavore food?


Saturday night's dinner was a mish mash of leftovers, part of which were from Friday night's Tomatillo Chicken Enchiladas. WOW...were they good. I'll have to post the recipe for them soon. Tomatillos, peppers, garlic and tomatoes from our garden and a locally grown onion all went into the mix, and then topped with garden pickled peppers and hot sauce! (Having a garden is AWESOME!) 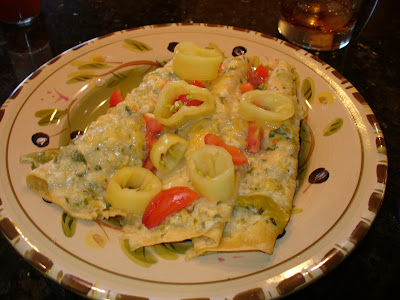 Sunday's locavore fest included local blueberries and yogurt on my cereal, and Chris had a tomato sandwich with our own tomatoes. Dinner included potatoes, tomatoes and green beans from our garden and Chris opened a bottle of red wine from Troon Vineyard, a local winery. We had some vanilla ice cream from Umpqua dairy, too. 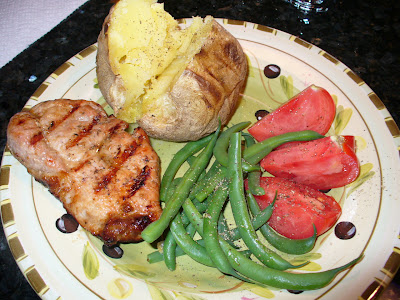 It is not that difficult to find local food in your community. You just have to get out and look for it! Local farmers are friendly and knowledgeable about their food. They love to share recipes and how-to ideas. Go out and find some local food to eat! You will be glad you did!

What are you eating local this week? Share your locavore feast in the comments!
Posted by Corrie Beebe at 9:45 AM