After my weekend classes a couple weeks ago I was feeling pretty darn wiped out. There was lots of going to bed early to try and recover. When I wasn't going to bed early I was doing homework and trying to maintain some semblance of normalcy with my house/home routine. Today, for the first time I actually felt like I had energy this afternoon when I got home from school. Instead of wanting to lay down and take a nap I was ready to clean up the kitchen, start some laundry and play with the kitty.

Speaking of the kitty, we haven't talked much about her (or anything else) lately. She is a HOOLIGAN! She is about 4+ months old now, growing a lot and getting into all kinds of mischief! Like this:

Yes, that is a huge tree in my back yard. And, if you look closely, you can see the hooligan waaaay up in the top of the tree on the right. It's probably about 25' or so off the ground. She is crazy. 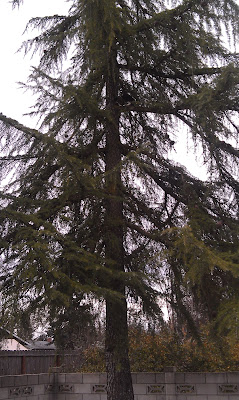 Oh, how did she get down, you ask? She fell. Yah. She is young and not so strong as she might think, and a little clumsy, too. She climbed down about 5 feet and then lost it and fell the rest of the way down. So crazy! Here she comes crashing down, amid a bunch of tree debris and lands feet first on the ground.

She is fine. Crazy, but fine. 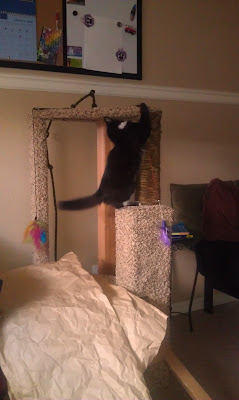 I don't let my cats roam around outside unattended. There are too many other cats and things they could get into, so I monitor them. She has been outside with me or Chris almost every day since Saturday. She loves it! Ever since she discovered the tree, though, we have had to really keep her away from it. She almost got away from me today...she made it about six feet up before I got ahold on her and yarded her back down. She is a hoodlum! 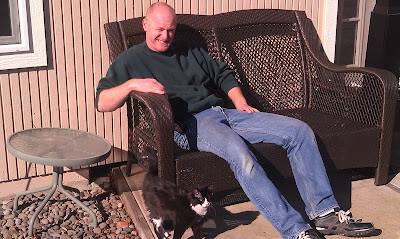 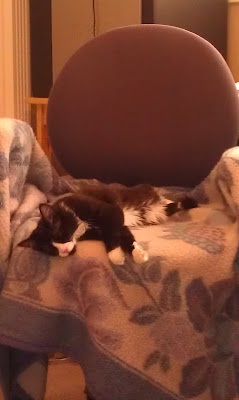 What else is going on? Well, my cousin Marcela had her baby girl, Paloma Evangeline Cary, yesterday. Marcela had a miscarriage last year that was really emotionally devastating. She has two boys already, Tomas and Alejandro. I was really excited for her when she found out she was pregnant again, and that she was having a little girl. Both mom and baby are well and happy.

This is my new favorite breakfast: 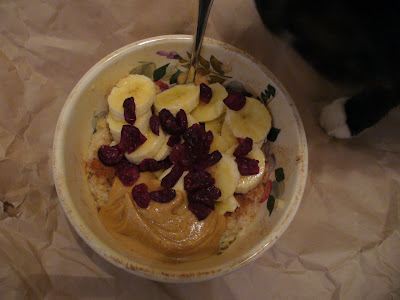 We also have planted some of our peppers and tomatoes for the garden. They are inside and we are hoping to have some decent size plants to plant by mid-May when we are past the danger of frost. Last year the seeds took too long to get going, and the starts we started got a little shocked when we moved them. We are hoping for better results this year. In the meantime, our guest room is serving as a temporary greenhouse as well as guest room. Speaking of guests, we had an awesome Super Bowl Sunday! My brother and his friend came down to visit and hang out with us. The sun was shining, it was warm and we had lots of yummy snacks. He brought a delicious chili and Chris smoked a brisket. We had chips and veggies and whatnot, too. We also tried some of our homemade limoncello....TASTY! Potent, but tasty! Plus the Giants won in the last minutes of the game, which was awesome!

I thought the commercials sucked. They weren't even funny or interesting. Mostly we sat there asking WTH? Stupid.

Chris made dinner the other night. I can't give you a recipe because he just threw a bunch of stuff together, but I will tell you that it was delicious! A tiny bit spicy from the spicy mexican style carrots, but really yummy! 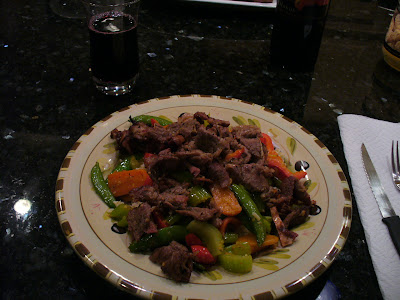 And to wrap things up on a totally random note: I bought these Christmas decorations for .50 cents! That, my friends, is my kind of bargain! 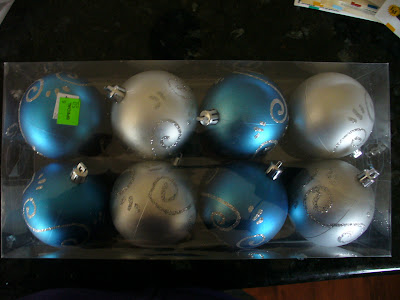 Have an awesome Thursday! I have to study for two mid-terms, grade papers for the class I TA for, read a bunch of stuff. respond to an on line discussion, and uhm...oH yah...write 10 annotations of academic articles/papers about mediation and conflict management. Color you jealous!!