Our garden got off to a slow start this year.

Our spring weather was much colder and wetter than normal, so many of our early spring plants just didn't do anything. It was frustrating and pathetic.

We waited to plant much of garden until much later than last year because 1) we planted too early last year and 2) our spring weather was so yucky this year. As a result, it has been a bit of a slow progression to get to the harvest stage.

Finally, though, nearing the end of August, we are starting to really get some good stuff happening. This picture shows a variety of stuff out of the garden over the last couple of days. 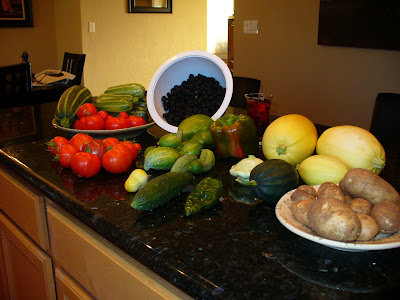 We are about to be inundated with tomatoes, which is nice considering last year our poor tomatoes never recovered from the late frost.

We are also about to be inundated with peppers! Anaheims, New Mexico's, Poblano's, Banana peppers, and Jalapeno's. We are going to get a couple of Cayenne, but nothing like last year. Chris' Tomatillo plant has tons of "lanterns" on it, but I have no idea if it is going to actually produce fruit.

The zucchini is finally slowing down.

We chopped down the corn...it wasn't salvageable after the bugs got to them early on.

We also attempted to pickle a bunch of jalapenos and banana peppers a few weeks ago. We tasted those, and they are gross. We have no idea what we are doing wrong. We have followed recipes, but we have had to cut them down because we don't have 4-8 pounds of whatever. In doing some research I am starting to wonder if that is part of the problem. I really don't know.

It is VERY disappointing to be throwing away our harvest because of nasty flavor. It is also very disappointing that we didn't get a harvest of pickling cucumbers to make Bread and Butter pickles with, because those turned out amazing last year!

We have a whole bunch of banana peppers that are ready to be picked, but we are gun shy about trying to can or pickle them at this point. I'm not sure what we are going to do with them. I think maybe we will just have to freeze them.

If anyone has any thoughts or suggestions about pickling, we are open to them!


Even with all the trial and error, it really is wonderful to be able to go out to my garden in the evening and pick a little of this and pluck a little of that and create a dinner from my own back yard. I love that aspect of my garden. So even if some things don't do well, and we have failures in kitchen processing, I am still going to keep gardening!
﻿﻿ ﻿﻿
Do you garden? Are you having trials and tribulations this year? Or are things going awesome? Let us know in the comments!
Posted by Corrie Beebe at 10:57 AM