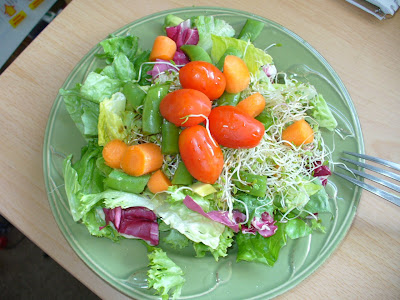 Well, today is day 14 of my spring detox/cleanse. Which seems kind of appropriate being that today is the FIRST day of SPRING! Happy Spring!

Every time I do this it gets easier and I get more creative in the kitchen with what I make. Because I eat no animal fats or animal proteins during the cleanse, except for fish, I pulled out some of my vegetarian and vegan cookbooks and made some delicious stuff! I don’t have pictures of everything, but I will tell you about some of the yummy yum stuff we had. 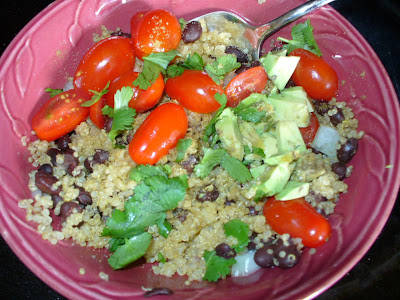 I actually really love this lunch. It is leftover quinoa with black beans added. I heat it up in the microwave with a little garlic and cumin; then I add some fresh chopped cilantro and tomatoes. Sometimes I throw in some onion, too. And this time, to get a little good fat, I added a bit of avocado. WOW…talk about good and the different textures really make this yummy.

For dinner one night we marinated, in a basic balsamic vinaigrette, onions (red and white), red pepper and zucchini; 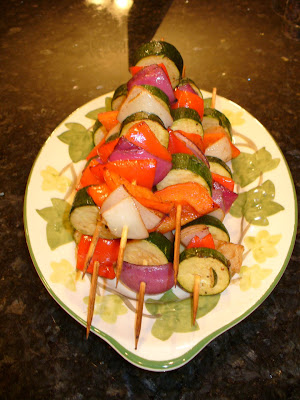 cooked on the grill and then served alongside some seasoned grilled cod and couscous. 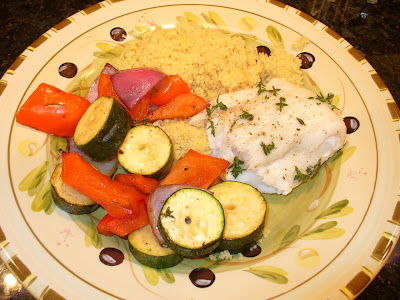 I needed some snacks, too. I found this quite yummy recipe on a food blog. You can find it here: http://www.howsweeteats.com/2011/03/cilantro-lime-white-bean-hummus/ 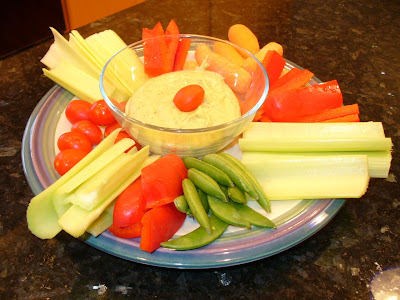 It is a cilantro, lime and white bean hummus. Wow…light, tasty and no guilt! The author served it with pita bread, but I used cut up veggies.

Now, I’m not a huge fan of acorn squash. I eat it periodically because Chris likes it, but it has never been my favorite. He wanted some and it is within the guidelines for my cleanse, so I made it. I served his with the traditional butter and brown sugar, but for me (no sugar or butter!) I added some raisins, cinnamon and a tiny drizzle of honey. It was good. 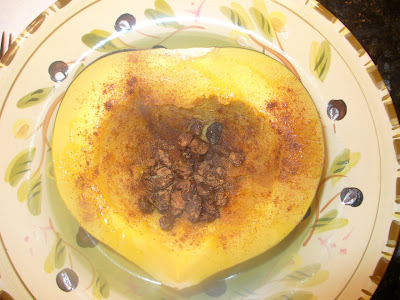 The weird part: I had some for breakfast the next morning. I really like it. Better than the night before when it was fresh out of the oven and MUCH better than I typically like acorn squash at all! Score! New breakfast food!

Chris said this picture looks gross, but it was a very delicious juice! Apple, carrot, lemon, celery, kale, and red pepper. It was sweet and frothy. 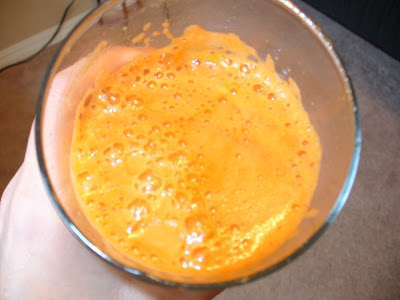 For St. Patrick’s Day, I couldn’t partake of the typical corned beef and cabbage (no animal products) so I made a marinated lentil “salad” and used it to stuff cabbage rolls with. VERY good. After steaming the cabbage rolls I drizzled them with just the tiniest bit of balsamic vinaigrette.

We have also used the lentils just to eat alone and Chris put some in a tortilla with cheese and heated it up like a burrito. I still have some left and think I might toss some on top of some mixed greens for lunch tomorrow. This recipe was from The Mediterranean Vegan Kitchen.

Lest you think I never make anything that doesn’t taste good, I will share with you a recipe that I made which did NOT taste good. Let me start by saying that typically I am a fan of split peas and split pea soups. I am also a fan of parsnips. However, the recipe I found for split pea parsnip soup (made in the Crockpot) was not good. I think it was a matter of perhaps too much parsnip and the wrong seasoning. It was seasoned with dried thyme, which combined with the sweet of the parsnip just made the soup all wrong for me. I ate the one bowl I dished up and tried to have some leftovers, but it was yucky. :(

On a happier note, from the same vegetarian slow cooker cookbook I adapted a “minestrone” recipe. I didn’t want to add any pasta so I used two kinds of beans: cannelloni and red kidney, along with a yellow squash, zucchini, carrot, onion, celery, can of tomato, and broth, plus lots of seasonings that she didn’t call for. It was pretty good, but clearly needed a bit more “meat” to it. So I had some leftover red rice which I added. That was much better. It gave the soup some heft. Next time I would add some pearl barley or brown rice. It also needed more salt.

I also made a few very delicious smoothies. One was pineapple, mango, and banana. Another was banana and blueberry (turned out very dark looking) and also a banana, orange and pineapple. All very tasty, and filling.

So, I’m wrapping it up today. I had oatmeal with dates and banana for breakfast; lunch was leftover minestrone with some celery and cilantro lime hummus. Dinner tonight is orange and fennel roasted cod with couscous.

I have my menu planned for the next week as well, and though it will definitely not be as strict, I still plan on keeping my overall eating pretty clean.

I have a couple of other posts coming up soon…in the meantime: HAPPY FIRST DAY OF SPRING!!
Posted by Corrie Beebe at 4:09 PM