Well, back in August 2010 I posted a picture of some shrimp stuffed Poblano that I had made, but didn’t post the recipe. It is a very tasty meal that we have had again since the original post. I didn’t post the recipe originally because I thought it needed a little tweaking. Well, I have since done some tweaking and am going to give you the revised, non-stuffed recipe.

Actually, it can be done two ways and I’ll give you both. 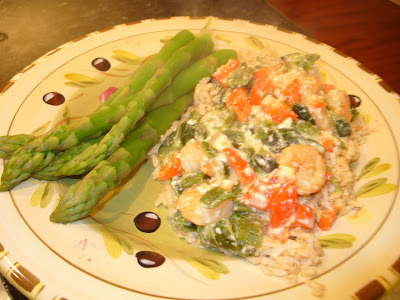 Revised: Shrimp Poblano “curry” (This recipe is enough for two with some leftovers)

Cut bell pepper in half, and seed it. Broil bell pepper and poblanos until skin is blackened. Place in plastic zip top bag for 5 – 10 minutes to help steam the skins off. Be careful, they will still be VERY hot. Finely chop bell peppers. Remove top and seeds from poblanos, dice.

Heat a large skillet over medium high heat. Add ½ of olive oil to pan; add shrimp and cook until pink. Remove shrimp. Add remaining olive oil to pan. Add garlic and sauté for 30 seconds stirring constantly to keep from browning. Sprinkle flour over the top of the garlic along with the ground red pepper. Let cook for one minute. Slowly whisk in half and half and then ½ cup of the milk. It will look kind of chunky but break up the flour/garlic chunks with the whisk. Whisk constantly for one minute. Reduce heat to medium low, allow to cool slightly; add cheese. Allow the cheese to melt well, stirring to blend. Add the shrimp, diced red bell pepper, and diced poblanos back to the pan, stirring well to mix. Add salt to taste. If needed, increase heat to heat through. You may want to add the remaining ½ cup milk at this point, depending on how thick your sauce is. You want it moderately thick, but still saucy. Once heated through add optional chopped cilantro and squeeze of lime juice.

Once heated through and the cheese is all melty, it’s ready to eat! Serve over brown rice. 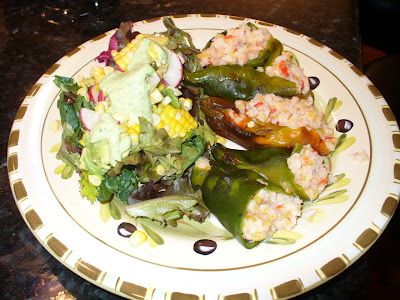 The ingredients are the same, and the process is nearly the same for the stuffed peppers, except that you don’t dice the poblanos up. You leave them whole, removing the tops and seeds. You also chop the shrimp up before adding it back to the cheesy mixture. The shrimp, bell pepper, cheese mixture gets stuffed into the whole poblano. Everything tends to cool off during this process, so I recommend keeping your oven hot after the broiling of the peppers originally, and placing the stuffed peppers onto a cookie sheet, so once the poblanos are stuffed, you can quickly put them back into the oven for a quick warm through.
Posted by Corrie Beebe at 9:39 AM