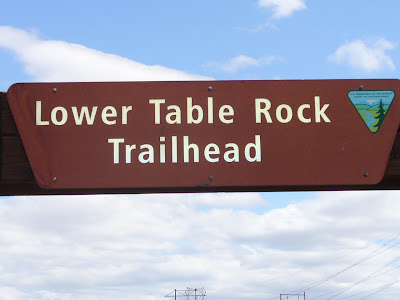 Another hiking adventure, so soon? Why yes!

It was a nice day here in Southern Oregon today. Partly cloudy, but they were big, white puffy clouds and there was plenty of blue sky and sunshine in between.

Chris was up early and got a ton of yard work done. The front yard looks MUCH better.

Lower Table Rock is the “twin” to Upper Table Rock, which we hiked a couple weekends ago (see prior hiking post for details). The Table Rocks are estimated to be about 7 Million years old, and created by lava flows. They rise up out of the valley about 800’ and have a flat plateau top, hence the name.

The Lower Table Rock is said by the local Takelma Indian tribe to be the younger of the two table rocks, and the more mischievous! I learned that from a local Indian storytelling session that I went to for school.

In any case, the Lower Table Rock trail is a bit longer than the Upper Table Rock that we did before. There is some confusion as to the actual length because one website said it was 8.6 miles roundtrip, while the sign at the trailhead said it was 1.75 to the top. Chris and I think that the 8.6 miles includes the big long trail that goes across the entire top of the plateau. Similar to Upper Table Rock, the hike to the plateau is almost an 800’ vertical climb. 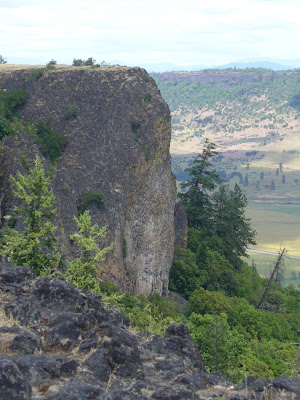 This trail is a bit more “touristy” feeling in the beginning. The trail is wider, more heavily graveled initially, and there are several signs along the trail pointing out the history, flora and fauna of the area. A bit up the trail though, these signs and the touristy feel goes away.

The hike starts out moderately, but then has a pretty significant climb, followed by some more moderate climbs that weren’t too difficult, and finishes, like Upper Table Rock with a pretty significant last steep climb. About halfway up the main trail, the gravel mostly stops and it becomes more of a packed dirt trail. In most places it is two people wide. The majority of the trail is in shade, which was nice, since it was fairly sunny and warm in the open.

Once we reached the plateau there was a well worn path leading southwest across the plateau to the edge of the table. 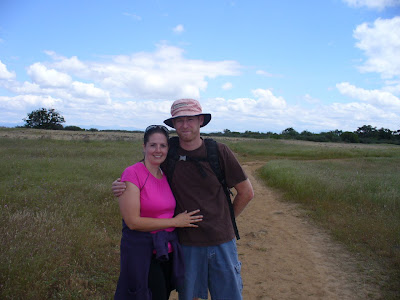 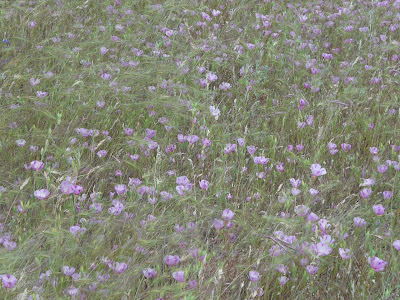 Also, the Lower Table Rock plateau was much more meadow with fewer big lava-type rocks, which made it much easier to walk across. 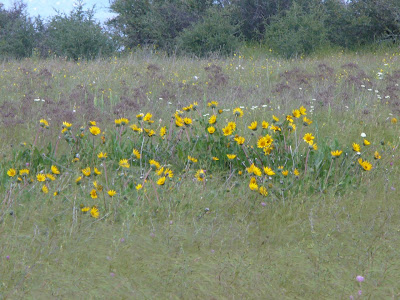 We walked across to the southwest side where we sat and looked across the valley below. 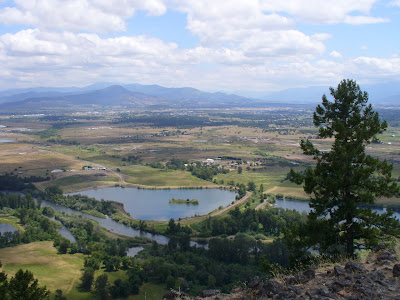 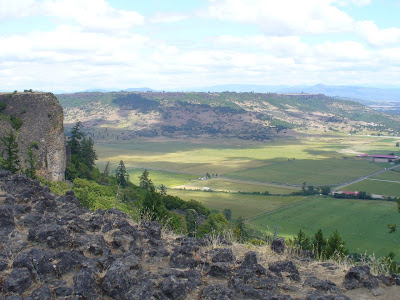 We ate a lovely picnic lunch and enjoyed the view of the birds playing on the updrafts of air. 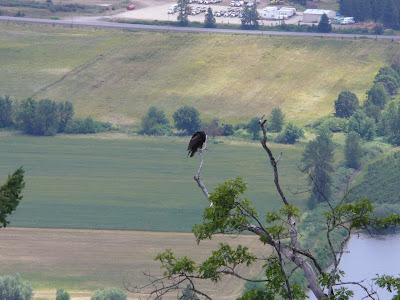 After we ate, we hiked around a bit more and got a great view of the Rogue River down below. 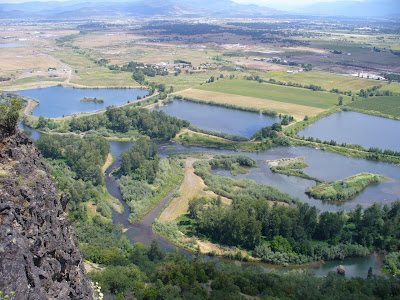 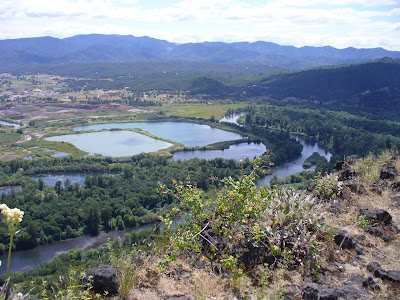 We also got to see a real treat: Erickson Air Crane has a Sky crane Helicopter that they were doing test flights on. So we could see them take off and fly around the Table Rocks and then head back to land. It was very cool.

After that we headed back toward the trail down. It is a pretty steep descent! There was quite a bit of almost jogging down the trail on the steeper parts to keep from slipping.

All in all, we figured that we were out there for about 3 hours or so, most of which we spent actually hiking and walking, with a short lunch break. By the time we were done we were both tired and worn out.

We aren’t sure what is on tap for tomorrow, but we may go looking for a fishing adventure! I’ll keep you posted!
Posted by Corrie Beebe at 7:09 AM

Beautiful pictures of the area. Hope all is well.